Judge Amy Coney Barrett after listening to almost five hours of opening statements from each of the Republican and Democratic members of the Senate Judiciary Committee was sworn in, formally introducing herself to the committee in her opening statement where she vowed to serve “faithfully and impartially.”

“If I am fortunate enough to be confirmed, I pledge to faithfully and impartially discharge my duties to the American people as an Associate Justice,” Barrett said during her 12-minute remarks.

She focused her opening statement pledging to be a justice who apply the law “as written” and emphasized the role of the justice, saying it is not the court’s duty to “solve every problem or right every wrong” in American life.
take our poll - story continues below
Completing this poll grants you access to Texas Politics updates free of charge. You may opt out at anytime. You also agree to this site's Privacy Policy and Terms of Use.

“Courts are not designed to solve every problem or right every wrong in our public life. The policy decisions and value judgments of government must be made by the political branches elected by and accountable to the People. The public should not expect courts to do so, and courts should not try,” Barrett stated.

She added, “I believe Americans of all backgrounds deserve an independent Supreme Court that interprets our Constitution and laws as they are written. And I believe I can serve my country by playing that role.”

Before being sworn in, both Indiana’s Republican Senators — Mike Braun and Todd Young remotely introduced Barrett.

Barrett said she would bring new perspectives to the bench, being the first Justice from the 7th Circuit in over 45 years, along with being the only sitting justice who didn’t attend an Ivy League law school and a mother of school-age children to serve in the high courts.

After speaking about her family, Barrett focused on how she would as a Justice interpret the law, citing the influence of the late Justice Antonin Scalia, whom she once clerked for early in her career and described how his philosophy that is known as a textualist and originalist has “shaped” her perspective as a judge.

“It was the content of Justice Scalia’s reasoning that shaped me. His judicial philosophy was straightforward — A judge must apply the law as written, not as the judge wishes it were. Sometimes that approach meant reaching results that he did not like,” Barrett said. “Justice Scalia taught me more than just law. He was devoted to his family, resolute in his beliefs, and fearless of criticism. And as I embarked on my own legal career, I resolved to maintain that same perspective. I worked hard as a lawyer and a professor; I owed that to my clients, my students, and myself. But I never let the law define my identity or crowd out the rest of my life.”

She also noted the woman predecessors that help pave the way for future female justices, praising the first woman, Justice Sandra Day O’Connor to sit on the high court, and paying tribute to the late Justice Ruth Bader Ginsburg, saying she never sought to fill the vacancy to “take her place.”

“I was nine years old when Sandra Day O’Connor became the first woman to sit in this seat. She was a model of grace and dignity throughout her distinguished tenure on the Court,” Barrett said. “When I was 21 years old and just beginning my career, Ruth Bader Ginsburg sat in this seat. She told the Committee, ‘What has become of me could only happen in America.’ I have been nominated to fill Justice Ginsburg’s seat, but no one will ever take her place. I will be forever grateful for the path she marked and the life she led.”

Barrett described the standards she says she sets for herself on ruling in any court, a line that Democrats would likely seize upon for their line of questioning of arguments during the confirmation hearing. She told the committee as District Judge for the 7th Circuit, in every case she has ruled was “done my utmost to reach the result required by the law, whatever my own preferences might be.”

“When I write an opinion resolving a case, I read every word from the perspective of the losing party,” Barrett said. “I ask myself, how would I view the decision if one of my children was the party I was ruling against? Even though I would not like the result, would I understand that the decision was fairly reasoned and grounded in the law? That is the standard I set for myself in every case, and it is the standard I will follow as long as I am a judge on any court.”

Tuesday’s hearing schedule from the Judiciary Committee is set to begin questioning Barrett with Democrats focusing their strategy heavily on asking the Judge on the Affordable Care Act. Despite the fact that nominees to the Supreme Court typically avoid revealing how they would rule in a possible case in such one could come before them, Democrats are planning to use answers to their questions as bait for election talking points. 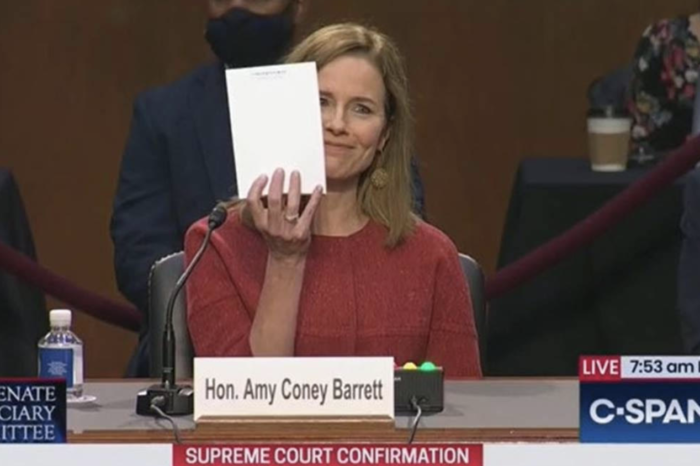