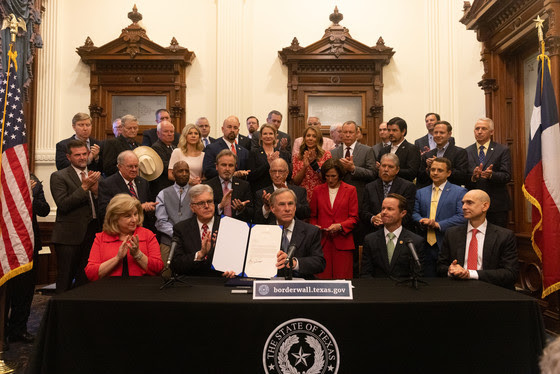 At a press conference held at the Capitol in Austin Wednesday, Republican Governor Greg Abbott expanded on the details of the State of Texas’ plan to build a border wall. Abbott had initially announced the plans at the Governor’s Border Security Summit last week in Del Rio, which brought together law enforcement, city and county officials, and landowners to discuss strategies to secure the border and keep communities safe.

“The Biden Administration has abandoned its responsibilities to secure the border and Texans are suffering as a result,” said Governor Abbott. “The problems along the border are only getting worse due to President Biden’s inaction. Property is being destroyed, deadly drugs and illegal weapons are being smuggled into communities throughout the state, law enforcement is having to redirect their resources, and county judges and mayors are facing skyrocketing expenses.”

The Governor signed a letter to the Texas Facilities Commission directing them to hire a project manager to oversee planning, construction, and execution of the Texas border wall.

Abbott was joined by Lieutenant Governor Dan Patrick, Speaker Dade Phelan, Senate Finance and House Appropriations Chairs Jane Nelson and Greg Bonnen, and other members of the legislature. Together, the lawmakers signed a letter authorizing the transfer for $250 million as a down payment to launch the construction of the border wall and hire a program manager and contractors. Governor Abbott also noted that the state budget allocates 1.1 billion dollars towards border security, though questions have been raised by members of the House Appropriations Committee over whether this would be an appropriate use of funds.

The governor also sent a letter to President Joe Biden demanding the immediate return of any land taken by the federal government to build the border wall and discussed plans to contact property owners about the possibility of appropriating that land to build the wall.

After hinting that the project would at least partially be paid for with public donations, Abbott  unveiled a donation page for the wall, where anyone can voluntarily donate to the construction of the border wall.

“Texas is doing more than any state has ever done to protect the border, but it is clear that more is needed,” the governor declared. “Through this comprehensive public safety effort, we will secure the border, slow the influx of unlawful immigrants, and restore order in our border communities.”