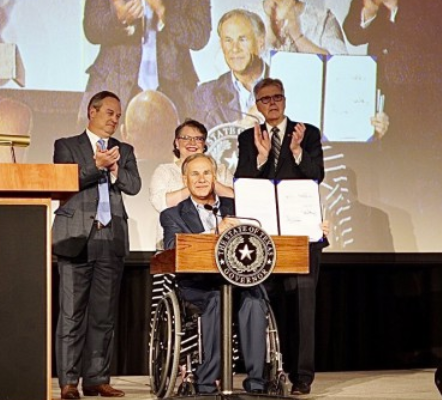 Months after declaring the state’s bail system to be an emergency item for the 87th Legislative Session and placing it on the agendas for the first and second special sessions, Texas Gov. Greg Abbott signed Senate Bill 6 into law Monday that requires people accused of violent crimes to pay a cash bail to be let free.

The Damon Allen Act — which is named after a state trooper who was killed at a traffic stop in 2017 by someone who was out on a $15,500 bond — requires suspects to either post cash bail or pay a percentage to a bail bonds company, while they are still legally presumed innocent. The bill also bars individuals arrested on felony charges from a cashless release if they were already out of jail on bond for a previous violent criminal case. These changes will take effect on Dec. 2.

The legislation will also establish a new system for court officers to examine the criminal history of suspects before their bail is set. That policy will take effect in January. Other procedural changes are also included in the legislation that Abbott declared would “ensure Texas communities are safe and secure by making it harder for dangerous criminals to be released on bail.”

“Texas will remain a law-and-order state and continue using every tool available to preserve the safety that Texans deserve. That is why I am proud to sign the Damon Allen Act into law, which will reform our broken bail system in the Lone Star State,” he added.

Democrats and civil rights advocates have argued that the bill’s inclusion of only cashless bonds, but not money bail, will exacerbate wealth-based detention and lead to overfilled jails.