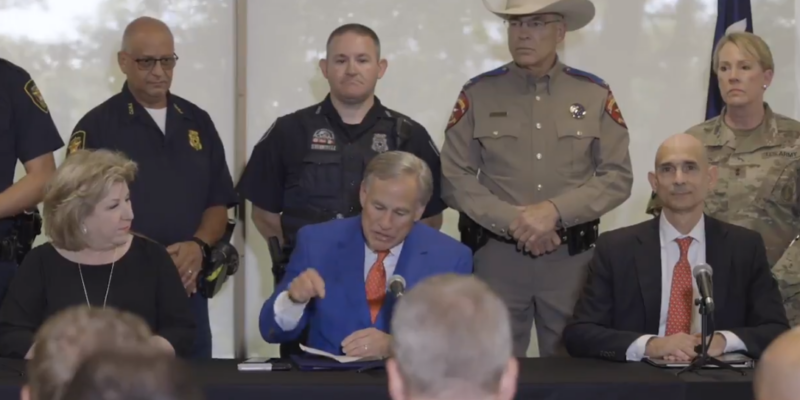 Gov. Greg Abbott signed House Bill 9 into law Friday that provides $1.88 billion in additional funds to increase immigration jail capacity and build a border wall with Mexico. The legislation will nearly triple the amount the state spends on border defense in the next two-year budget cycle.

“It is the federal government’s job to secure our border, but the Biden administration has failed to do its job, so Texas is stepping up to do what the federal government is supposed to do,” Abbott said as he signed the bill in Fort Worth. The governor was joined by the bill’s authors Lt. Gov. Dan Patrick and chairman of the House Appropriations Committee Rep. Greg Bonnen, alongside state Sen. Jane Nelson. He went on to say that the Biden administration “opened the floodgates” to illegal immigration, crime, human trafficking and drug policy.

The $1.88 billion spending bill, which passed as House Bill 9, supplements the $1.05 billion the state already allocated to border security last spring. According to Abbott, the funding will go toward resources such as the Texas Department of Public Safety and the National Guard, as well as the state’s border wall. Funds will also be given to local law enforcement agencies that on the southern border.

Democrats have denounced the bill as a waste of money and accused the governor of perpetuating false narratives about immigration. Characterizing the bill as an authoritarian power grab and theft of taxpayer money, Texas Democratic Party Chair Gilberto Hinojosa attacked the governor for attempting to distract from political failures ahead of the gubernatorial elections next year.

“Abbott’s failures are catching up with him, and he’s terrified that we will vote him out of office in just over a year,” Hinojosa stated. “So he’s doing what he always does: trying to distract from his massive failures by pointing the finger at immigrants and drumming up fear around our borders.”

Other Democrats have also argued that the money would be better used addressing other pressing concerns, such as the state’s power grid and financial burdens on retired teachers. Five senate Democrats, however, joined the 18 Republicans in giving final approval to the bill.