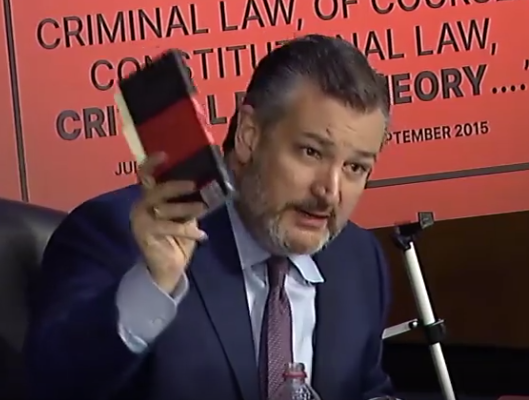 During the confirmation hearing for Judge Ketanji Brown Jackson before the Senate Judiciary Committee on Tuesday, Republican U.S. Sen. Ted Cruz questioned the first Black woman nominated for the Supreme Court on her views on critical race theory and record as a public defender.

Cruz pressed Jackson on her knowledge of whether or not critical race theory is taught in K-12 schools and proceeded to present a stack of books that he claimed are taught in Georgetown Day School, a K-12 school in Washington, DC, where Jackson is on the board of trustees. Among the titles were “How to be an Antiracist” and “Antiracist Baby,” both by author Ibram X. Kendi.

“It is filled and overflowing with critical race theory,” Cruz said of the school’s curriculum. “Do you agree with this book that is being taught with kids that babies are racist?”

“I have not reviewed any of those books, any of those ideas,” she stated. “They don’t come up in my work as a judge, which I am, respectfully, here to address.”

Cruz also joined his Republican colleagues Josh Hawley of Missouri and Marsha Blackburn of Tennessee in criticizing Jackson’s record on sentencing child pornography offenders. Allegations of being soft on crime have long been a standard line of attack from Republicans against Democrats’ judicial nominees and candidates. Jackson responded by emphasizing the nuance of her decisions and listed the factors a judge must consider in such cases, including the guidelines, a defendant’s age and the harm to the victims.

Both Texas Senators Ted Cruz and John Cornyn sit on the Senate Judiciary Committee, which is evaluating Jackson’s nomination in a multiday hearing. U.S. Sen. John Cornyn, the other Republican senator from Texas, asked the nominee about the court case legalizing gay marriage and questioned her defense of Guantánamo Bay detainees who allegedly faced mistreatment. Their questioning came during Jackson’s second day of her confirmation hearings for the Supreme Court. If confirmed, Jackson would make history as the first Black woman on the nation’s highest court and would replace the retiring Associate Justice Stephen Breyer.