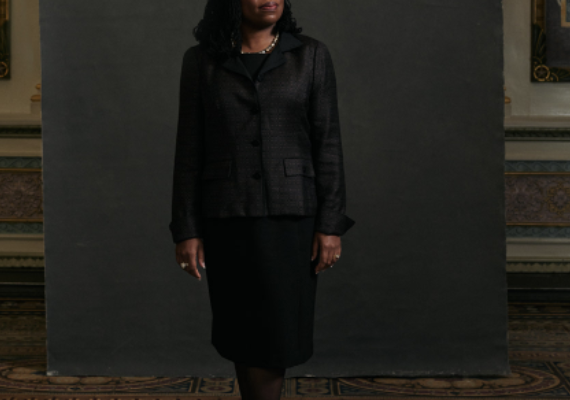 Jackson is a 51-year-old appeals judge with nine years of experience on the federal bench. She attended Harvard University and Harvard Law School, where she earned her law degree in 1996. After graduation, she held three clerkships with federal judges, including in 1999 as a clerk to Justice Breyer, who she is now under consideration to succeed more than 20 years later. From 2005-2007 she also worked as a federal public defender and has since spent much of her career in Washington, serving as a judge in the U.S. District Court for the District of Columbia Circuit from 2013 to 2021, and currently the Court of Appeals for the District of Columbia Circuit. She replaced Merrick B. Garland, who joined the Justice Department as Attorney General, on the Court of Appeals last year, and was confirmed by a vote of 53-44.

In late February 2022, she was nominated by President Biden to replace Justice Stephen Breyer, who announced his retirement earlier this year. The confirmation process took just over 40 days, involving a grueling multi-day marathon hearing in which she received hostile criticism over what Republicans portrayed as a pattern of leniency in her sentencing of child sex abusers and tried to paint her as a liberal on issues of race, gender, guns and abortion rights.

After a concerted effort to derail her nomination, Judge Jackson was confirmed on a 53-to-47 vote, with three Republicans joining all 50 members of the Democratic caucus in backing her. She is the third Black justice and only the sixth woman in the court’s more than 200-year history. Neither Cruz nor Cornyn joined their three colleagues, despite calling her nomination “inspirational” and “long overdue,” respectively.

Before the Senate took a vote, a group of Senate Republicans joined a press conference led by Cruz to air their grievances about Jackson’s expected confirmation. Cruz was joined by Sens. Mike Lee (UT), Marsha Blackburn (TN), and Lindsey Graham (SC).

After weeks of questioning Jackson on controversial topics from critical race theory to child pornography to transgender athletes, Cruz derogated her nomination as “out of the mainstream.” He also claimed that “she is an extreme outlier on the question of crime,” despite consensus by independent analysts that Judge Jackson’s sentencing record is well within the mainstream.

Cornyn, for his part, argued that Jackson would attempt to legislate the bench.

“My vote against Judge Jackson is not a rebuke of her legal knowledge, her experience or her character,” Cornyn said. “She said she would not try to do Congress’ job making laws, but over the years … we’ve come to see a pattern of judges who embrace the concept of judge-made law.”

Jackson celebrated her confirmation at a White House ceremony, noting the significance of her nomination for young Black women and girls.

“It has taken 232 years and 115 prior appointments for a Black woman to be selected to serve on the Supreme Court of the United States,” she said. “But we’ve made it. We’ve made it. All of us.”