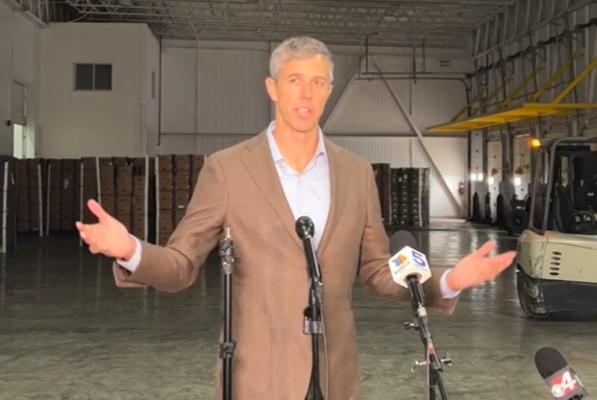 In response to reports that Gov. Greg Abbott‘s inspection policy for all commercial trucks entering Texas from Mexico is causing massive trade backlogs, Democrat Beto O’Rourke said in a news conference Tuesday that the two-term Republican “is killing businesses and the Texas economy.”

The former congressman from El Paso was joined by two South Texans who said their livelihoods have been upended as trucks seeking to bring produce and manufactured goods into Texas are waiting in the rigs for up to 16 hours while each truck awaits a 45-minute inspection.

“Democrats and Republicans agree that Abbott’s political stunts are bad for business, terrible for Texas,” O’Rourke later tweeted. “They are driving up prices, worsening the supply chain, and causing inflation.”

Last month, the Biden administration announced its decision to end Title 42 —a pandemic-era emergency health order that allowed immigration authorities to turn away migrants at the border. The news provoked a strong reaction from state leaders, who responded with a two-phased plan to secure the southern borders.. Phase 1 of the governor’s plan includes the Texas Department of Public Safety (DPS) conducting enhanced inspections of ‘unsafe’ commercial vehicles. Those inspections have stymied traffic at the state’s international bridges, resulting in massive delays and millions of dollars in economic damage to businesses in the state. Abbott says the inspections are necessary because commercial vehicles are used by drug cartels to smuggle drugs and humans into the state.

Though O’Rourke has long called for the end of Title 42, he criticized the Biden administration for failing to provide a plan for the influx of migrants. He said the president should have given border communities a plan before ending a pandemic-era immigration rule that will lead to an increase in migrants.

“It does not make sense to end this until there is a real plan and the capacity in place to handle those and address those that come over,” O’Rourke said in an interview with The Texas Tribune on Tuesday. “I have yet to hear a plan from the Biden administration to address the dynamic we will have on the border once Title 42 ends.”

First bus of migrants arrives in Washington, D.C., from Texas