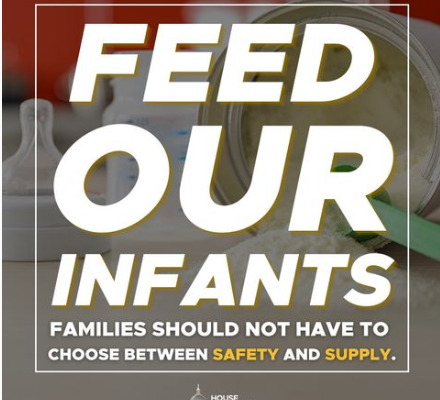 The House of Representatives passed two bills to address the nationwide baby formula shortage Wednesday night as parents struggle to access the product they rely on to feed their babies.

One measure would help enable recipients to buy formula by expanding the brand choices available to mothers on the federal assistance program WIC, formally known as the Special Supplemental Nutrition Program for Women, Infants and Children. The bill would also require that formula manufacturers have contingency plans for protecting against disruptions in supply in the event of a recall. It passed with a large bipartisan majority of 414 to 9.

The crisis was triggered by the closure of a manufacturing facility in Sturgis, Michigan by Abbott Laboratories, a popular baby formula brand, following a federal investigation into their products after four babies taking the formula developed bacterial infections, two of whom died. Abbott has said there is no link between its formula and the illnesses.

Some Republicans have falsely suggested shortages are down to the Biden administration sending baby formula to undocumented immigrants, though these assertions have been dismissed as inaccurate.

Amid the shortages, many parents had been forced to pay out of pocket for formula because the only brands left that they’re able to source in stores are not covered by the program. At the start of May, 43% of baby formula was out of stock at retailers, according to Datasembly, a product data firm.

A second measure also passed Wednesday night, albeit among more partisan lines. The bill would provide an extra $28 million to the Food and Drug Administration to help get fraudulent formula products off store shelves and boost the part of the workforce focused on formula, as well as FDA inspection staff. All Democrats present for the vote supported the bill and were joined by just 12 Republicans. No Texas Republicans backed the legislation.