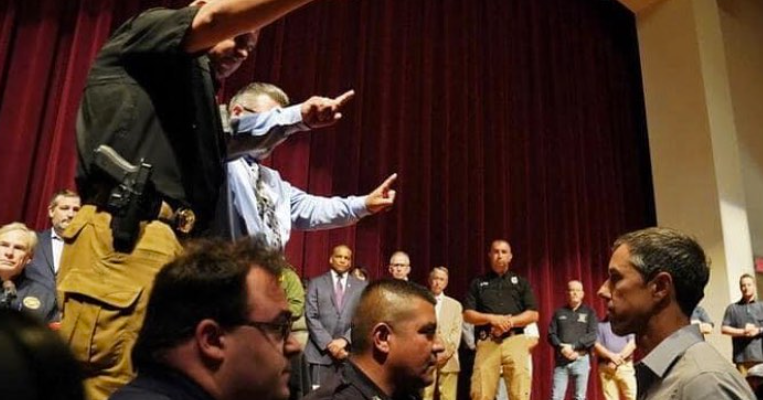 As seen in a video of the press briefing published online, O’Rourke is seen approaching the press conference table where Abbott was seated on stage alongside Lt. Gov. Dan Patrick.

“You are doing nothing,” O’Rourke said. “You are offering up nothing. You said this was not predictable. This was totally predictable when you choose not to do anything.”

O’Rourke was eventually escorted out of the room by security guards present for the press conference. On his way out, he turned back to address Abbott again.

“This is on you until you choose to do something different,” O’Rourke said. “This will continue to happen. Somebody needs to stand up for the children of this state or they will be continue to be killed just like they were killed in Uvalde yesterday.”

Press conference speakers can be heard instructing the Democratic gubernatorial candidate to “sit down.” At one point, an official calls O’Rourke “an embarrassment” and a “sick son of a bitch.”

As governor, Abbott has presided over a weakening of gun regulations in Texas, despite repeated mass shootings in the state, including deadly shootings at a Walmart in El Paso, a high school in Santa Fe and a church in Sutherland Springs. Abbott signed a law last year that allows Texans to carry handguns without a license, so-called permitless carry. Earlier, in 2015, Texas passed a law permitting those with concealed handgun licenses to carry a concealed weapon on a college campus.

Responses from the audience at the conference were mixed. At one point, an attendee loudly shouted, “go home,” as O’Rourke was leaving while another chanted: “Let him speak! Let him speak!”