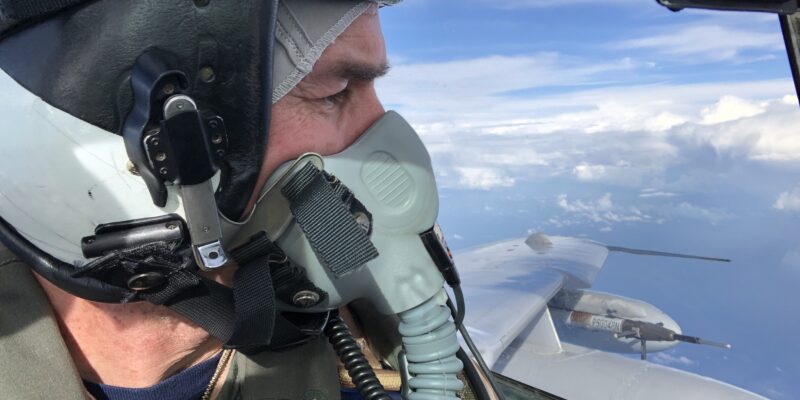 When first-term Congressman Ron Wright (R) passed away earlier this year after a long battle with lung cancer, a vacuum was created to fill the coveted Dallas-Fort Worth and Republican-leaning 6th congressional seat. One Republican congressional hopeful, who now joined the crowded field of 24 Republican, Democratic, Independent, and maybe someone from the  Whig Party, candidates is former U.S. Navy Combat pilot and current State Legislator, Jake Ellzey.

Unlike the other candidates in the race, Rep. Ellzey has run for the U.S. House of Representatives in this very same district.

Texas Politics recently spoke to Ellzey about the race and the ongoing border crisis that has gripped Texas, the nation.

According to Ellzey, he believes that his personal and reliable leadership skill set is needed in Congress.” I haven’t missed a day, committee hearing, haven’t missed a vote,” said Ellzey. “My candle has three ends, and I’m burning them in afterburner.”

Like most Republicans, Ellzey believes that the border crisis was created by President Joe Biden, who told immigrants to travel to the U.S., calling it a “humanitarian disaster” and a “PR disaster” for the Biden Administration.

“It’s a humanitarian disaster,” Ellzey. “You don’t send FEMA to a place that’s not an emergency,” adding that “No country can remain safe if they can’t control its borders”

“If we can’t open our schools because of COVID-19, how on earth are we opening our border.”- Rep. Jake Ellzey

Ellzey then echoed what Rep. Troy Nelhs (R) said yesterday in that President Biden was now tied to the illegal practice of human trafficking because of the administration’s efforts to relocate illegal immigrants being detained along the southern border to other parts of the country.

“They are coming in through one part of the border and then flying them to another part one, now you have human trafficking issues, that for me, is the ultimate of all evil and is modern-day slavery,” said Ellzey.

Republicans, including Ellzey and former President Donald Trump, and Rep. Ronny Jackson, have all expressed their concerns about President Biden’s mental capacities.

Rep. Jackson recently stated, “I can tell you right now that the way Biden is hiding from the public is a MAJOR red flag. Something’s not right!”

Ellzey echoed Rep. Jackson, saying that over the years, Biden has clearly lost a step, among other things.

When the Texas GOP and Chairman Allen West put forth their 8-point legislative priorities initiative to the Republican-led state legislature,  Ellzey signed right up, telling TP that he was “confident the statehouse is going to address all of the Texas GOP priorities” and he is or would be a “Joint-Author or Co-Author” to legislation addressing all of the priorities.

Texas Gov. Greg Abbott has set the special election for May 1.