As the 2020 presidential election nears, all eyes, including those of Venezuela’s Dictator Nicolas Maduro, will be fixed on the TV to see if President Donald Trump can win reelection.

Like all of the Progressive and Socialist Democrats around the world, Maduro wants Trump to lose and hopes that a Biden presidency will mimic that of President Barack Obama’s, where the Maduro regime was allowed to operate its criminal enterprises, including his very lucrative narcotrafficking venture with impunity.

Maduro has had no choice but to become the Pablo Escobar of South America after Venezuela’s oil business plunged as a result of his and of his former boss Hugo Chavez’s “corruption” and years of “mismanagement” of their country’s once profitable petroleum industry.

The downturn and ongoing unrest in Venezuela appears to be pushing Venezuelan-Americans, Cuban Americans, and Hispanics as a whole,  in support of President Trump over former Vice president Biden
take our poll - story continues below
Completing this poll grants you access to Texas Politics updates free of charge. You may opt out at anytime. You also agree to this site's Privacy Policy and Terms of Use.

The most recent Florida polls (The biggest swing state) show that Hispanics will come out in support of Trump, especially those voters within the Venezuelan and Cuban-American communities.

As we all know, Trump and his administration have done what the Obama/Biden White House was not able to or refused to do, and that is levy sanctions against Chavez and his cronies.

What do Venezuelans, Cubans, and Nicaraguans voters in the U.S. have in common this election cycle?

All of these voting blocs have endured decades of hardship and corruption in their respective countries as a result of the late-Fidel Castro’s reign of terror over the Western Hemisphere.

Nicaragua’s Ortega and Venezuela’s Maduro both still take marching orders from the Communist regime in Cuba, even though Fidel has long been dead.

Senator Marco Rubio (R), who without question has been the strongest voice of opposition to both the Castro and Maduro regimes, has recently said that Biden has been trying to co-opt President Trump’s effective Venezuela policy.

Sen. Rubio responded to The Floridian’s request for comment about the Trump administration’s ongoing and crippling efforts against “Maduro’s illegitimate regime.”

“Maduro, Díaz-Canel, and Raúl Castro know the Trump Administration will always stand with the people of Cuba and Venezuela, as well as with Interim President Juan Guaidó and Venezuela’s legitimate government,” stated Sen. Rubio, As pressure increases on Maduro’s illegitimate regime in Caracas, the dictator is hoping that Joe Biden will win in November. A Biden victory will give Maduro a chance to wiggle free of financial sanctions, crackdown brutally on the legitimate government, and fracture the international consensus that he has to go.”

Texas Senator Ted Cruz (R) has also been very critical of Maduro’s regime, echoing Rubio in saying that Maduro is an “enemy of America”

“Nicolas Maduro, and Hugo Chavez before him, are enemies of America. They oppress their people. Maduro is illegitimate…Maduro is using military force to stay in office and he is not the legitimately elected leader of #Venezuela. @jguaido is instead.” pic.twitter.com/zyPxWJvvHj

Latinas for Trump advisory board member Lourdes Ubieta, a Venezuelan journalist in exile, emphasized that “for Hispanics voters, freedom in the Americas ( Venezuela, Cuba, Nicaragua) is a very important matter; for Venezuelan-Americans  the issue is determinant.”  In that respect, she emphasized that “U.S. infrastructure and investments in Venezuela need to be preserved” in order to safeguard U.S. security, and if Trump wins re-election in November, “the end of the regime is imminent.” 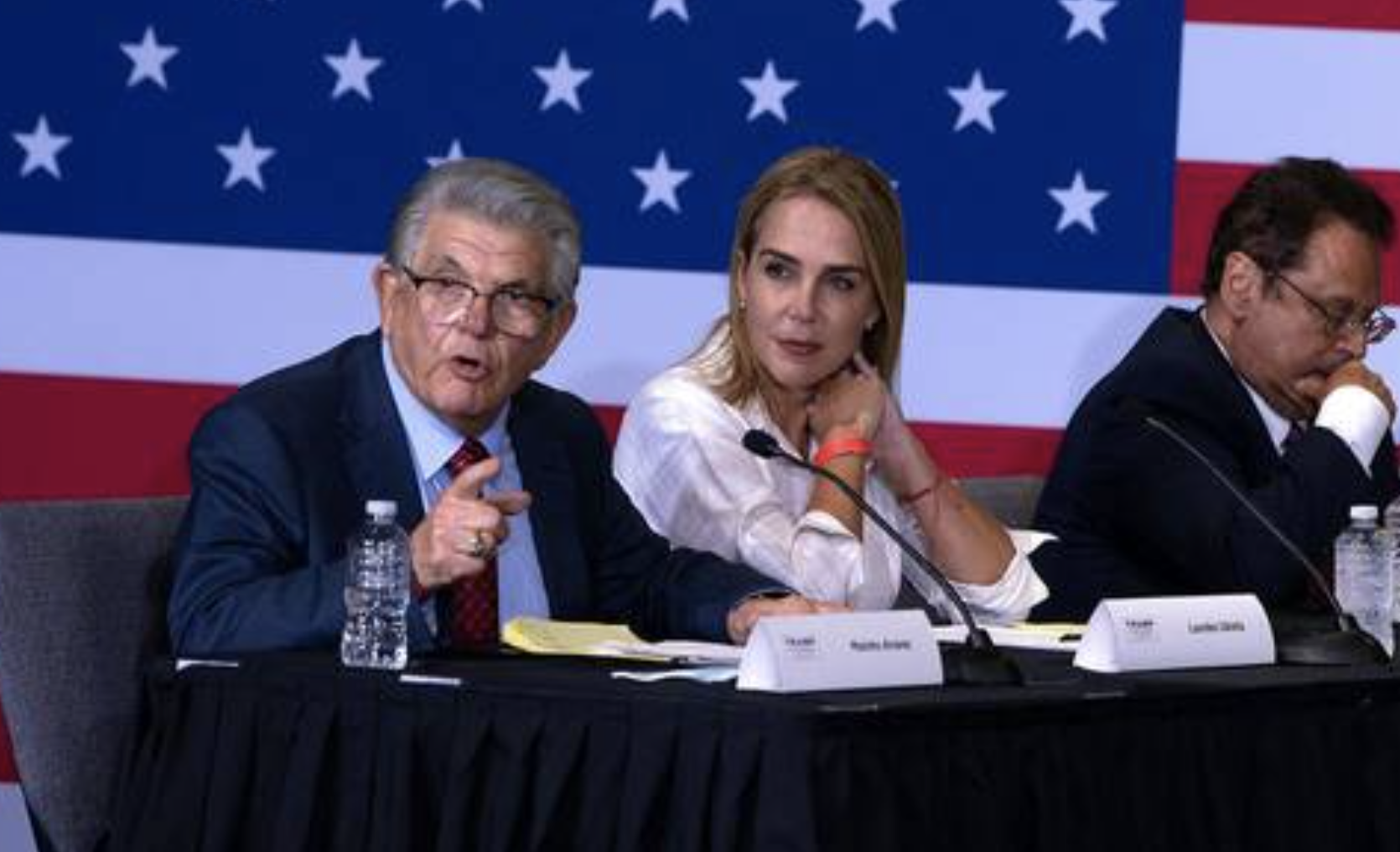 Loures Ubieta at Latinos for Trump round table in Miami, Florida

When asked if she believed that going after those illegal sources of funding that support Maduro and other narco states such as Bolivia and Nicaragua, would bring about change, Ubieta thoroughly agreed, as “the only things that have brought the regime to its knees are the sanctions and the price for the head of each one of the criminals.”

“The Venezuelan regime is a threat to everyone in the USA and in the region,” added Ubieta.  Its proven links to Islamic terrorism, drug trafficking, the export of agitators and rioters, arms trafficking,  money laundering, Russian and Chinese mafias, Colombian narco guerrillas, among others, make the Venezuelan regime, a direct threat to the United States, its institutions and its people.

The Obama/Biden administration talked a tough game against the regimes of Hugo Chavez and Nicolas Maduro but failed to assert leadership by not levying sanctions against criminal regimes.

Venezuela and the entire Western Hemisphere has a lot to worry about if Biden defeats President Trump next month. A Biden win could signal to the world that a more passive foreign policy will replace the existing and aggressive Trump policy against Maduro’s criminal regime.