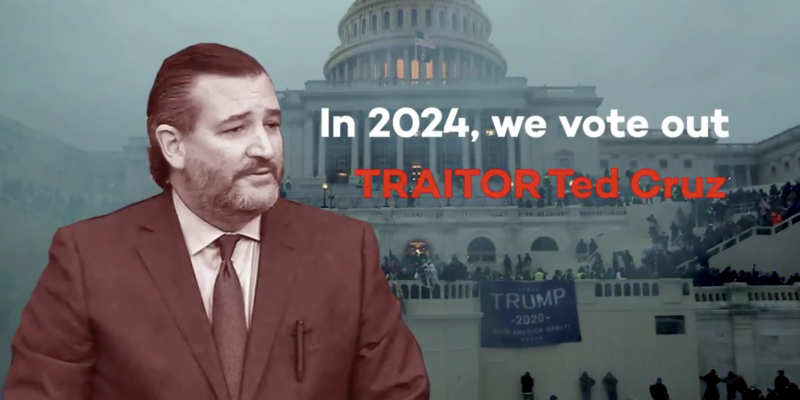 Republican lawmakers that voted to oppose the certification of the 2020 presidential election results have received heavy scrutiny that will continue to follow them until they face reelection. For Texas Senator Ted Cruz (R), he will face reelection in 2024, but detractors are calling for him to resign now.

Cruz has remained a staunch supporter of the President and has maintained that rampant voter fraud led to President-elect Joe Biden (D) winning the Electoral College.

However, with the election results certified and a January 20th, 2021 inauguration planned for the 46thPresident of the United States, lawmakers are looking for repercussions for past transgressions, including Cruz’s electoral opposition.

In a new advertisement released by Texas Democrats, they take aim at Senator Cruz, arguing that he “should be expelled from the Senate for inciting a violent insurrection” and that “if he doesn’t have the decency to resign, Texans have the power to vote him out in 2024.”

In the advertisement, Texas Democrats affirm that “leadership matters and Texans deserve better.”

Ted Cruz should be expelled from the Senate for inciting a violent insurrection.

If he doesn't have the decency to resign, Texans have the power to vote him out in 2024.

For Texas Democrats, Ted Cruz is not a Senator of the Lonestar state. Instead, he is “Traitor Ted Cruz.”

The Republican party is also facing infighting as a divide has been created between Republican lawmakers that support the President and those that do not.

This week, when the President was impeached for a second time, 10 Republicans voted in favor of impeachment. All of which can expect to be primary challenged when they begin to campaign for reelection.